In the Presence of Leaders
Juanita Puga

“This blindspot concerns not the what and how-- not what the leaders do and how they do it-- but the who: who we are and the inner place in which we operate, both individually and collectively.”  Peter Senge-Presence

If you would have asked me what leadership looked like a year ago, I would have painted a picture of several white, cisgender males sitting around a large conference room table. This is what I thought was the norm up until I reframed my definition of leadership. By taking in new information during my past year of studies within the Buell Early Childhood Leadership Program (BECLP), I was able to reconstruct my understanding of what leadership looks like.  I am learning to see others not for what they are but for who they are and how their being impacts my understanding of the world. This mental freedom allowed me to see those who surround me in a new light. The leaders in my world call themselves, “her and she”. They come from various age groups and multiple ethnic backgrounds. They have varying educational levels and speak a multitude of languages. The leaders in my world are mothers, caregivers, and professionals who share a passion for creating a safe and equitable space for our children to learn and grow. The leaders I now see are the staff within my HIPPY program.

When my administrator, Janis, approached me about bringing the HIPPY program to our organization, I felt excitement and worry.  Janis is known for having big ideas, but not always a plan on how to achieve them. I was afraid that the grand plan would require knowledge that I did not have about starting a new program. However, she had become a mentor and a leader to me. I trusted her vision and together we looked to the future. We envisioned a program that would support the growing population of refugees and immigrants as well as a large community of Spanish speaking residents. Since the inception of our program, we have grown from four to fifteen staff members and served families in over eight languages. I continue to look at the possibilities that every new year holds, hoping that the future of the program continues to grow and prosper for all that are involved. Eight years later, I look back on Janis’s leadership and willingness to take a chance on the possibilities. This leap of faith has resulted in one of the strongest programs in the nation.

“We are the leaders we’ve been waiting for.” Grace Lee Boggs
After eight years of coordinating a program, you would think it ran like a well-oiled machine. But as in any great program, change is inevitable. As my personal journey of leadership advanced and changed, so did how I lead my team of educators in finding their own leadership potential. In Fall 2019, as I was beginning the second semester of the BECLP focused on leading with others, a new team of educators joined me on the journey of the 2019-20 program year.  New opportunities that I was studying in coursework sparked by desire to include staff members' voices. The typical beginning of the year pre-service was now a more dynamic space for our shared learning.
Week by week, sparks of confidence began to emerge by applying various practices of Appreciative Inquiry.  This practice introduced inclusive learning approaches that illuminated the positive and promoted integrity within the work the team already found joy in doing. The HIPPY home visitors worked collaboratively to deliver quality programming while moving forward toward a cohesive goal. Most importantly this group of women began paying attention to the importance of equitable rights for children and families and became a vocal presence in our community.
​
HIPPY educators began spreading their wings within the context of the community stage. Their voices rose, advocating for change. One is now the president of the Head Start parent committee and another sits on the Weld County Early Childhood Council. They each have become advocates for the children and families they serve. Stories of their courageous yet humble achievements began to inspire a community, state, and a nation. and all it took was each believing in their own leadership potential. 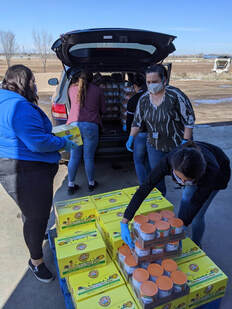 Now six months later, my team and I are facing a new challenge that requires us to use every bit of our leadership skills to get through. How do we continue to home visit when we are quarantined within our homes?  The idea of using technology was a new concept for most of the team. This did not stop them from moving on, from trying something new, from continuing to serve the community they had become active members in. When our world was impacted by Covid-19, the home visitors could have chosen to end their service term early, but for them that was not an option. Each educator stepped up when the families they had become so close to needed them most. Together, they joined forces with local agencies to connect families to resources and deliver supplies to doorsteps across the county. They created bags for all our HIPPY families that support family-together time with learning materials. They made decisions based on the good of the whole, each becoming leaders in this time of uncertainty.